GRAFT is a renowned architectural institution that thinks outside the box. Conceived by Lars Krückeberg, Wolfram Putz and Thomas Willemeit in 1998, GRAFT has matured into a diverse and profoundly successful studio whose brush strokes don’t just push the boundaries of their industry’s curve, but rub them out and redraw them in an unconventional way.

From luxury air taxi ports to historically sentimental squares and emergency buildings, they have an eye for choosing projects that are interesting to everyone and a precise knack for polishing everything they touch with a glassy holistic gleam. This dexterity has led them to design the retail identity of Mercedes Benz, rub shoulders with the likes of Brad Pitt, and earned them the nickname ‘the pop stars of architecture’. However, this isn’t a case of empty hype – GRAFT’s technical foundations are sturdier than the buzz around them.

We met Lars, Wolfram and Thomas in a minimal boardroom in their Berlin office. The main segment of the space was decorated with swirling bookshelves stacked with a myriad of books spanning everything from design and cities to climate change. In addition to this German arm of their studio, they have offices in Shanghai and Los Angeles, the latter of which is the birthplace of the firm almost 25 years ago. 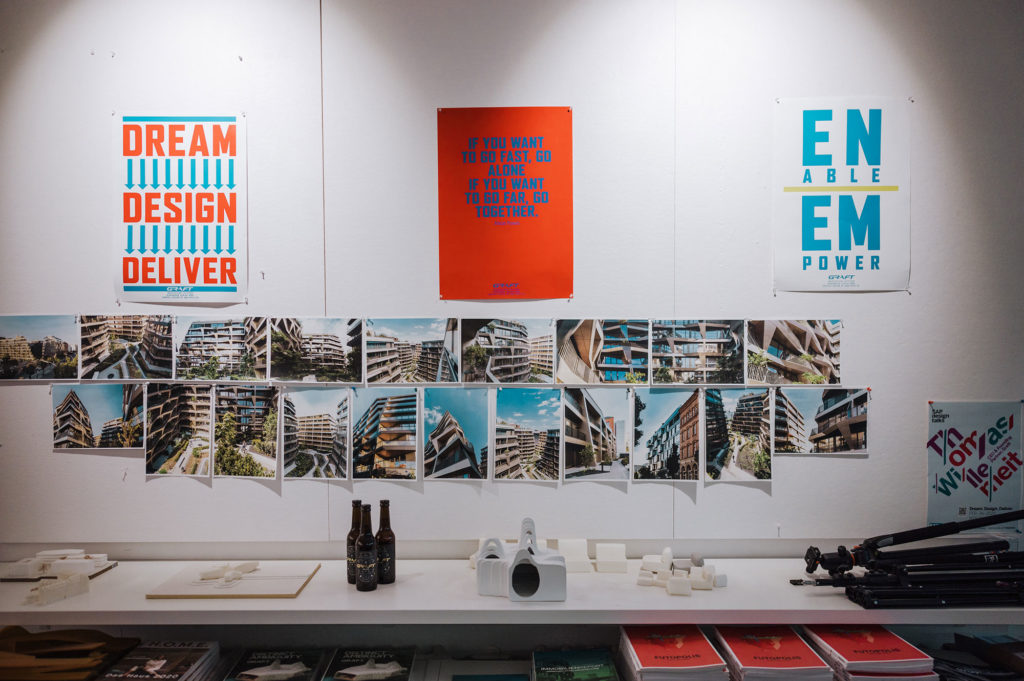 You might expect such a progressive studio to be full of airs and graces, however the atmosphere they breathe is relaxed – much like their origins as partners. The three met while studying at Braunschweig University in a boys choir and officially started the studio by writing an ambitious manifesto all those years ago. Now, as men with a powerful legacy behind them, they sit together and affectionately laugh at such a wide-eyed proclamation as Wolfram add that “it’s rare anyone has a master plan that works out.”

GRAFT was born out of a desire to pursue “architecture, not architexture” notes Lars. Despite the cookie-cutter path to success prescribed to architects at the time, which was to have a signature form, GRAFT chose not to commit to a singular approach. Instead, they grafted from one discipline to the next. When asked whether they ever worried if this chameleon approach would make it difficult to pinpoint a distinctive style, they immediately shook their heads. In their own words, the alternative is “not an option”. 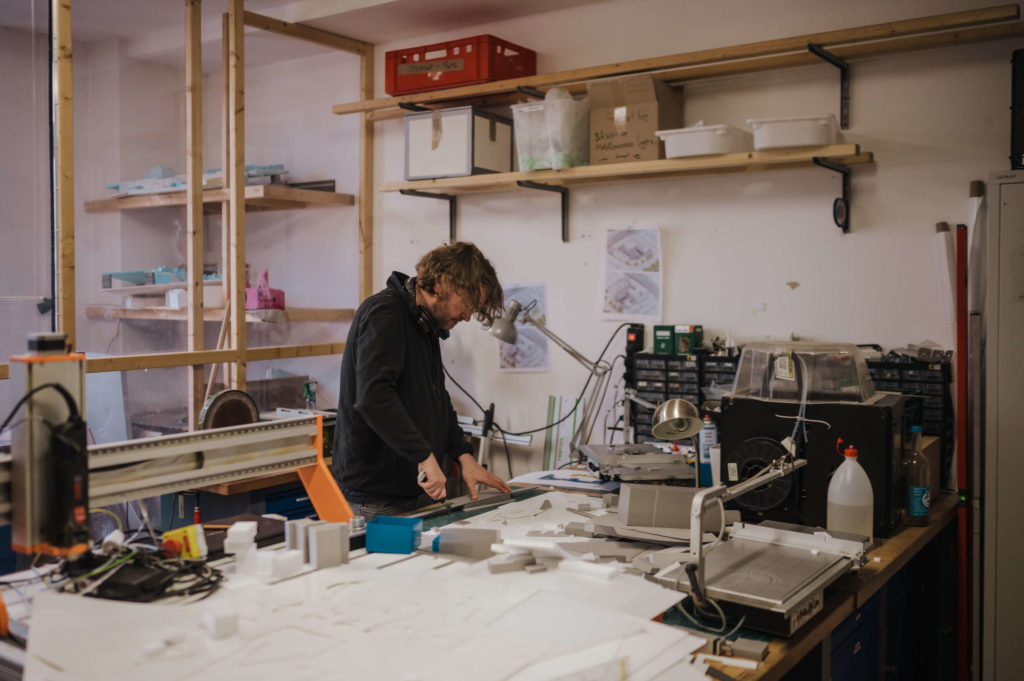 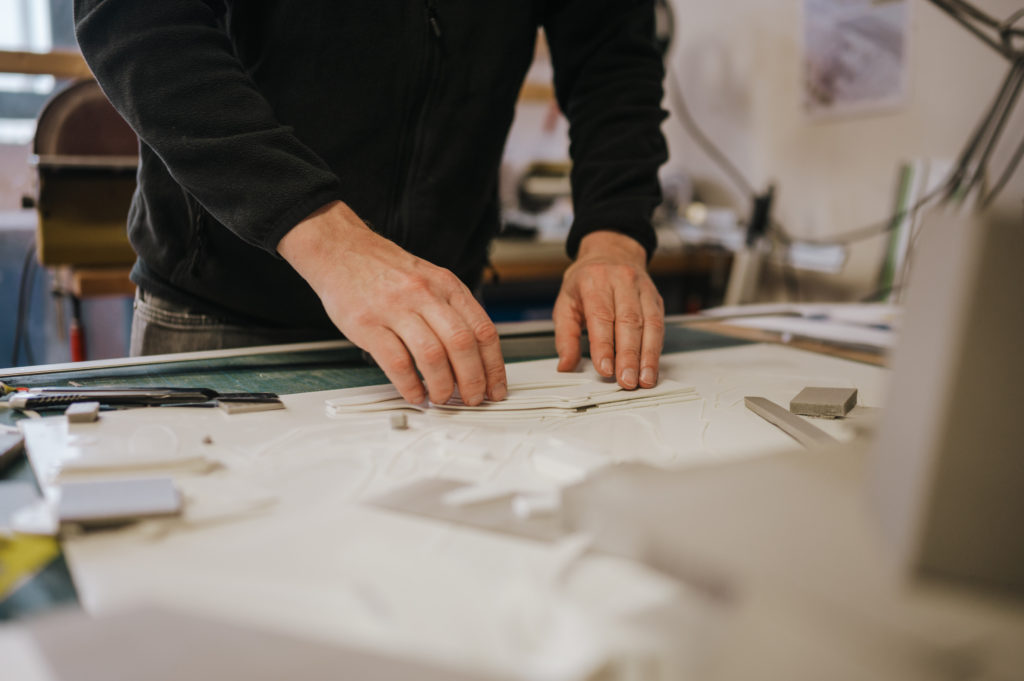 Where other architects look at a project and see how they can imprint their mark on the space, GRAFT goes into the mind of the space and works outwardly from there. “Contradictions challenge us. We’re inspired by them,” notes Lars. He goes on to describe themselves as “utopian realists” and paraphrases art critic and former client Dave Hickey when describing their inability to stand still, stating that “to have taste is to have a lack of appetite”. Wolfram explains that finding each project’s starting point follows a particular pattern: “we start by asking questions, then we question those questions and then finally, we question ourselves. If you have all the answers before diving into a project, then something is wrong. You’re not creating specifically. In architecture, context matters.” In this way, the constant in their signature is a consistent curiosity, not a shape or form, thus making them one of the contradictions they admire themselves.

While their inquisitiveness has always been fixed, their incorporation of other hallmarks has evolved over time, such as their prioritisation of sustainability. Lars goes on to explain this evolutionary bent: “when we started, sustainability was not at the forefront of our brains. Back then we just wanted to learn how the trade worked. Our only goal was to take our ideas and our talent, test them and throw them at the market to see the response. Nobody looked at sustainability back then the way they do now. At the time, it was just an application, an afterthought, something that would be added on at the end and that was usually, well, pretty ugly.” 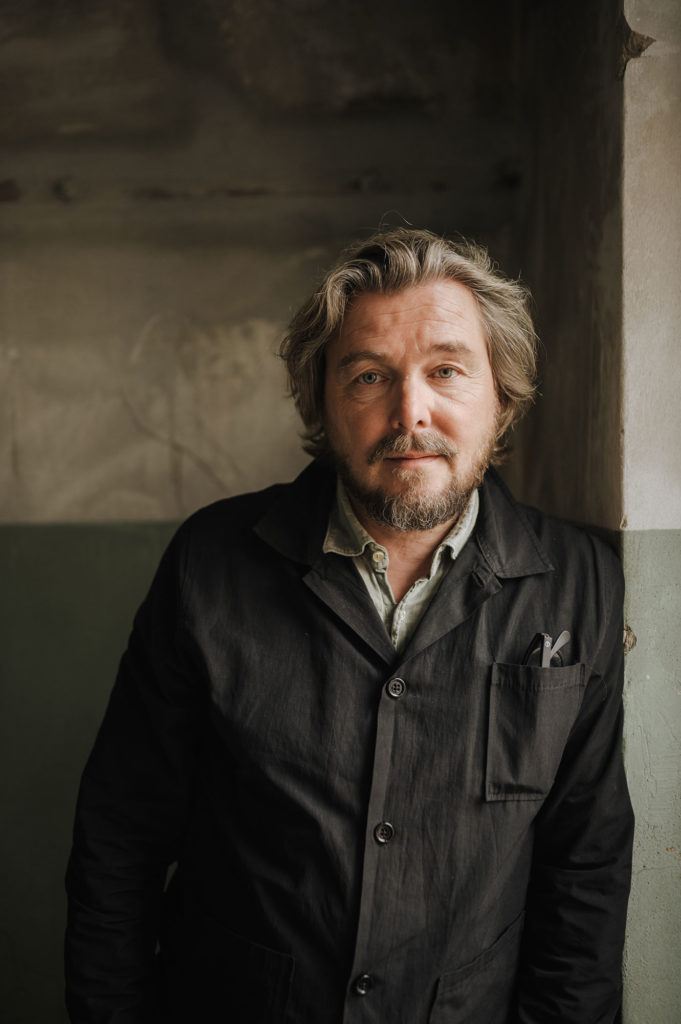 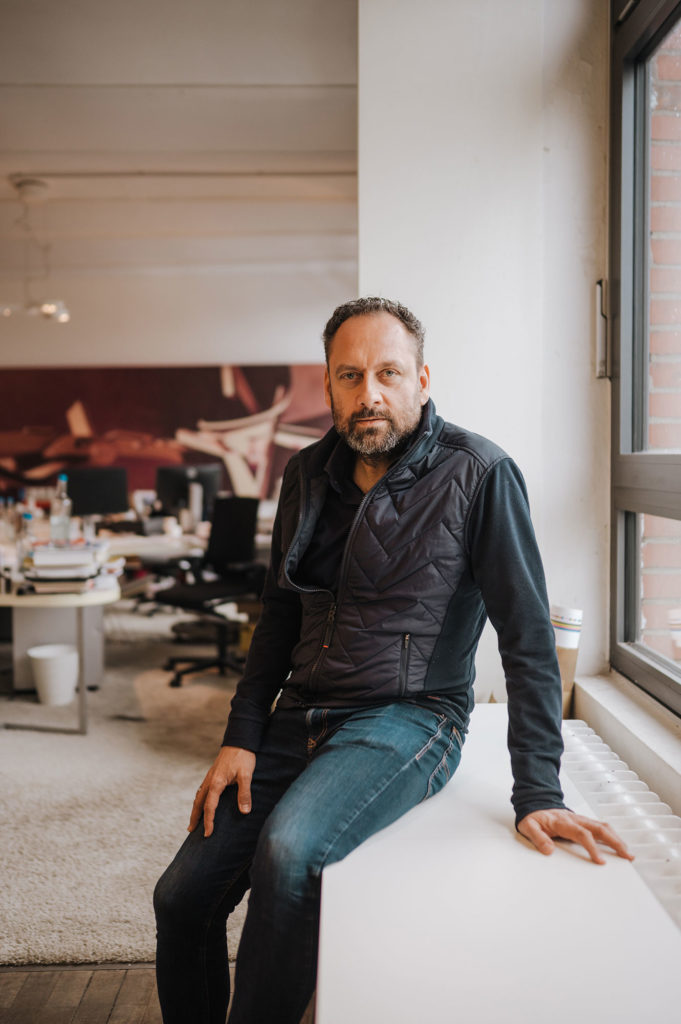 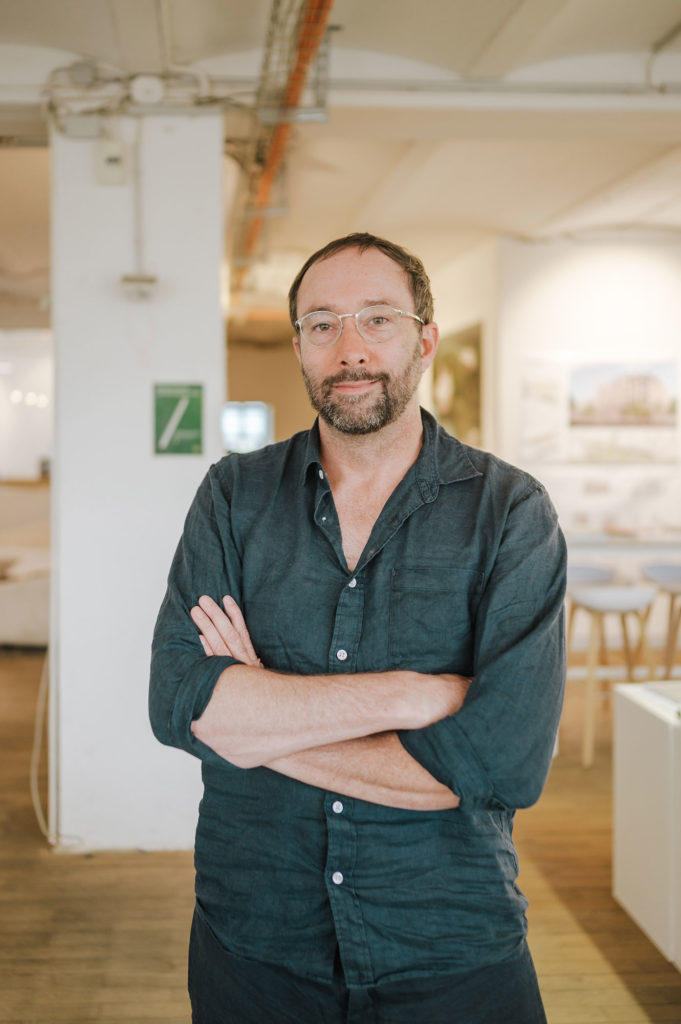 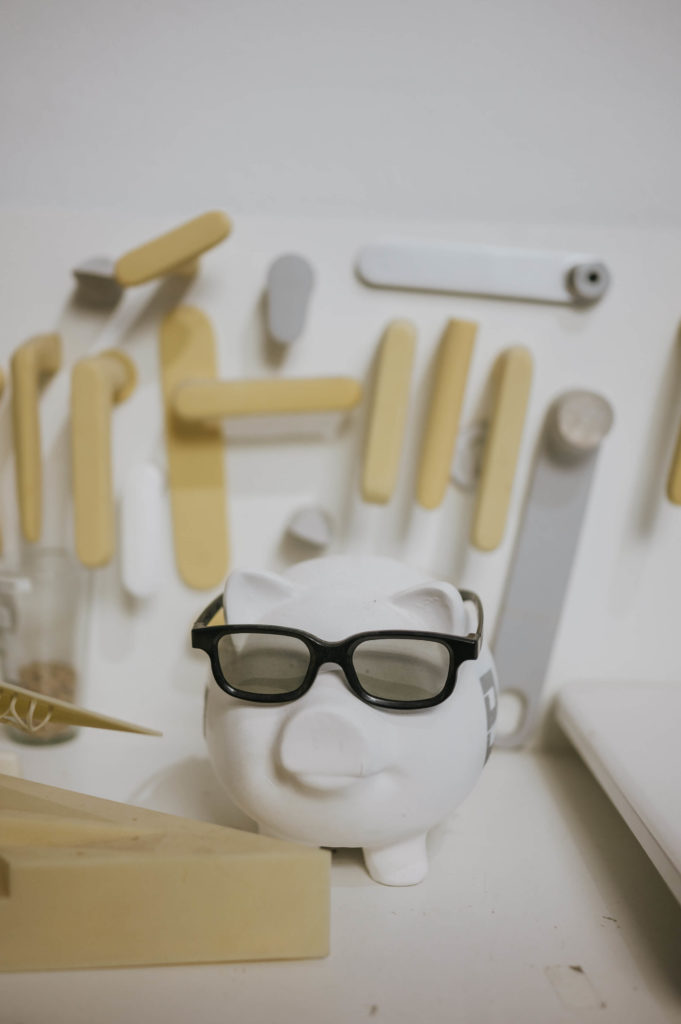 Since then, sustainability has wiggled its way into something that drives each GRAFT design. Lars continues: “the game changer for us was the ‘Make It Right’ project we worked on with Brad Pitt. We were chosen as the architectural curators to rebuild New Orleans after the hurricane in 2006. Due to the nature of the task, our designs couldn’t just be one thing, they needed to be all encompassing. Our design had to have buildings that were quick to build and affordable, but also sustainable. This taught us that sustainability only makes sense if it’s not an afterthought. It needs to be invisible or completely embedded in the complete holistic system of every design. That’s when it gets interesting. That’s when it looks good.”

One of the advantages to their signature chameleon approach is that it invites them to try their hand at just about any craft that inspires them. Just as their thought processes weave through contemporary styles and pillared disciplines, their catalog of projects are far-reaching and varied. When asked whether this versatility was primarily a commercial decision, they insist that it was instead a personal one, attributing this varied approach to the fact that GRAFT is a team effort.

“Why would we want to limit ourselves by being overly selective when we could be all embracing?”

As a shared studio, their breadth of their work represents their differences as much as their similarities. To showcase this, Thomas runs through the hypothetical careers they each may have had had they not chosen a life in their field: “Wolfram could have been a professional climber, I could have been a musician, and Lars would have made a great art historian.”

Wolfram says that if they had decided to enter the industry as individuals instead of a trio, they wouldn’t just have covered less surface area in terms of tangible projects, but they would have had less space to be curious, because “life would have gotten in the way”. After Wolfram’s reflection, Thomas chimes in: “there would have been so many missed opportunities because that one singular person was in a bad mood, or had children crying, or was fighting with their partner. However, because we’re a communal body, that didn’t happen. We were never tempted to slip into the mundane. Instead, one of us was always curious enough to run into the darkness of the unknown.” At that, Lars cuts in: “and more importantly, loyal enough to take the others along with him. To us, fueling this curiosity isn’t just provocative, it’s logical. Serendipity is our engine.”

A selection of GRAFT projects

Their amorphous spirit is evident in their finesse for both luxury and emergency projects. Their repertoire fans a keen interest for both social endeavours, such as African Solarkiosks and refugee housing, as well as deluxe projects, like private Tuscan villas and astounding vineyards. It was through their exploration of the dynamic between these two threads that the GRAFT Brandlab was born in 2014. This sector of GRAFT is specifically geared towards creating new, surprising and multidisciplinary solutions that are vanguards in their own right. Thus far, the lab has successfully tried its hand at everything from air taxis and digital rebrandings to the repurposing of Tegel airport. 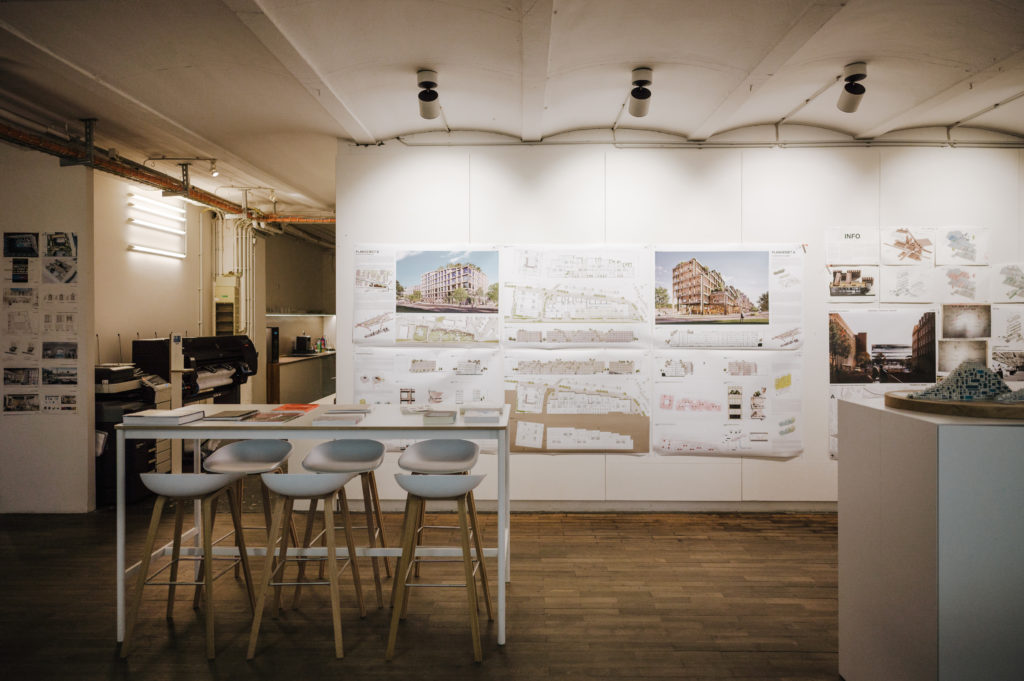 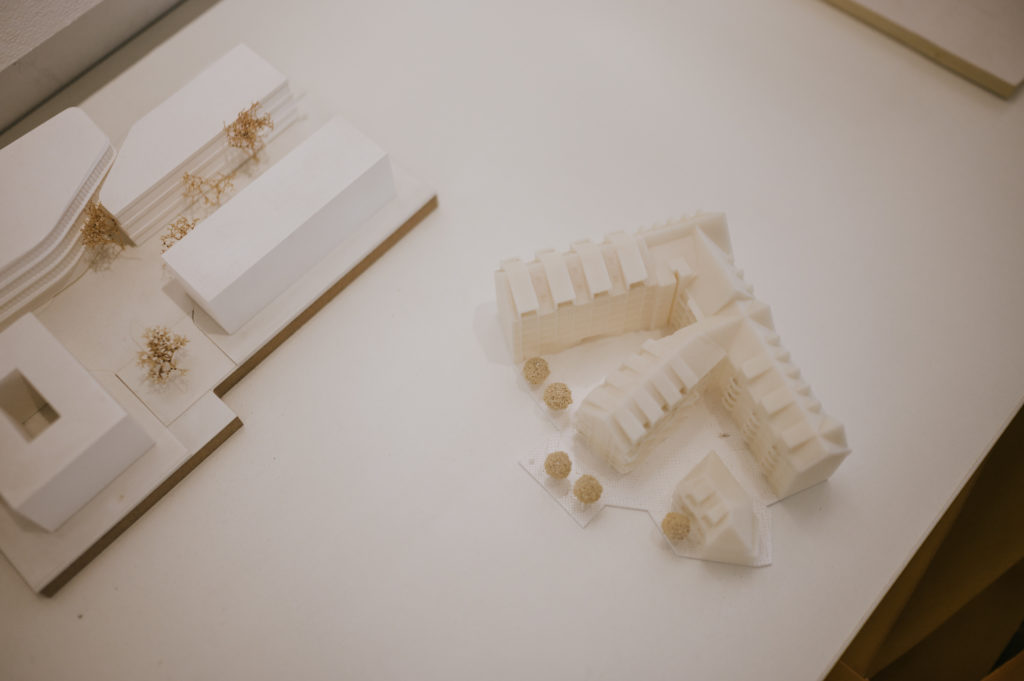 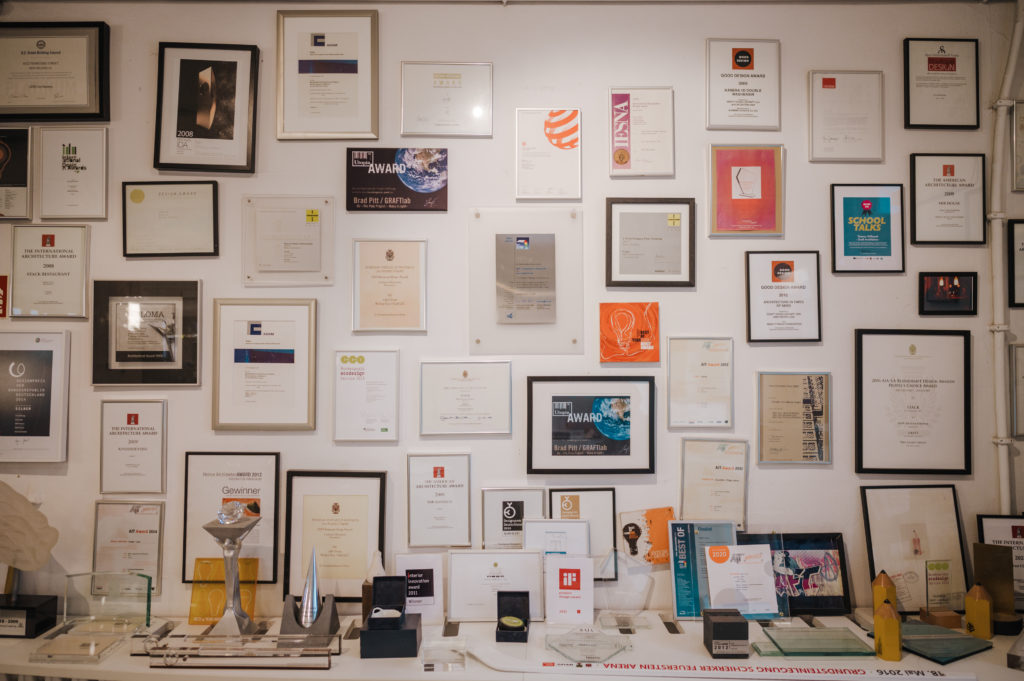 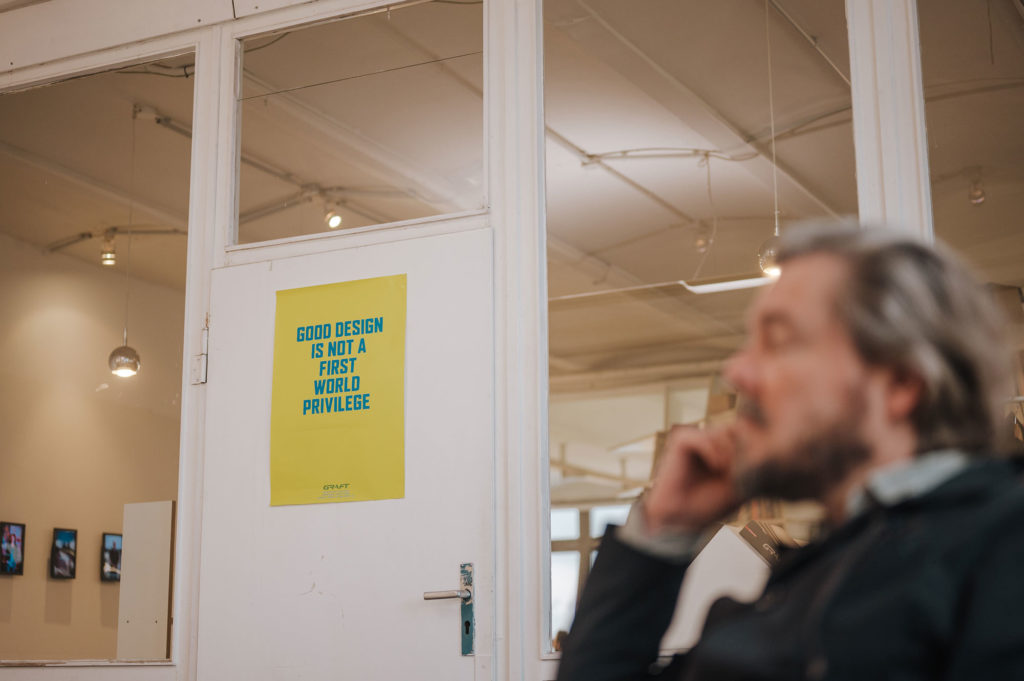 When asked whether they prioritise necessary or extravagant projects, Wolfram diplomatically insists that to GRAFT, all projects are created equal: “Why would we want to limit ourselves by being overly selective when we could be all embracing? Of course, we turn down clients whose ideals don’t match ours, but more often than not we try to see the good component in every project, because no matter your passion for its driving theme, whether it be sustainability, social justice or a pioneering technology, no project is ideal. There will always be something that goes wrong or something you don’t like.” In light of this, they aim to balance their focus between the ambitious and the necessary. They say that they review every pitch with “a degree of blind optimism” and choose to look at each as a one half full, no matter its context, honoring the youthful ambition that got them this far.

However, there’s no denying that the projects that have reached the desks of GRAFT have become more fascinating over the years. Their success and reputation has meant that they are now leading innovators, the guys you want on your side, which probably makes adopting this holistic rhetoric a little bit sweeter. For example, one of their current focuses is The Johanna and Eduard Arnhold Square, a quarter near Tiergarten which will honour Berlin’s forgotten Jewish philanthropists. To honor their contribution to society, GRAFT is building an enclosed garden with influences from Rome. At noon throughout the year, a point of light on a mirrored sundial touches a special meridian, illuminating different dates etched throughout the space which commemorate the important birthdays, deaths and celebrations of the forgotten. Then, on summer solstice, the light will illuminate the whole garden to mark the Arnhold’s birthdays. This example shows the degree to which GRAFT leaves no stone unturned or source untapped. 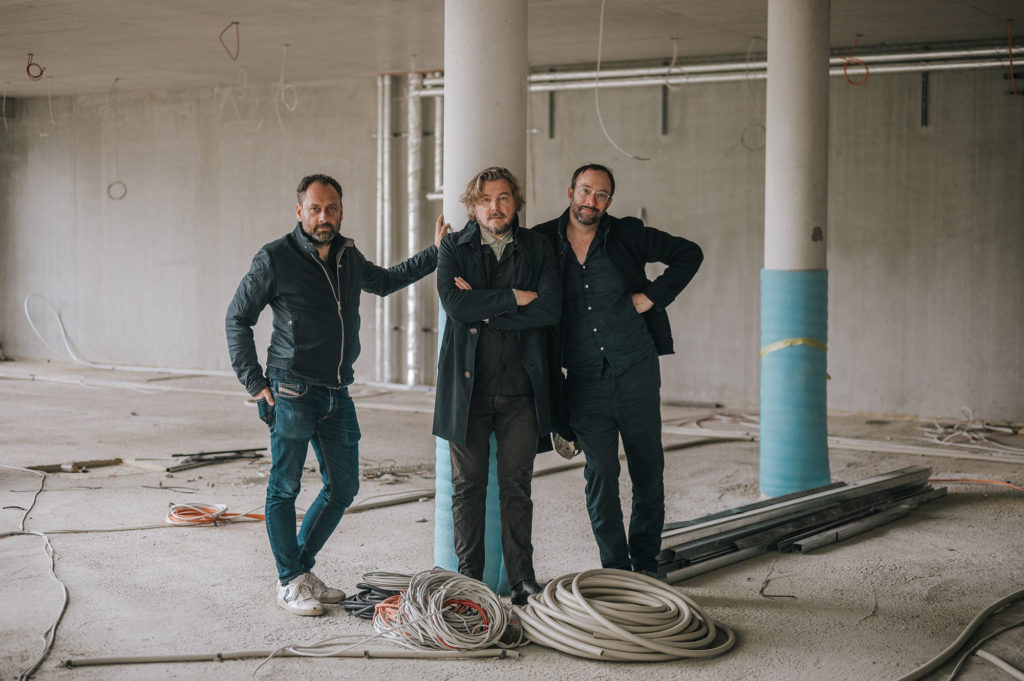 The team at the site of the new GRAFT Berlin office

When speaking about sustainability, Thomas compared an excellent sustainable design to a piece of delicate jewelry. “It might look simple and light on the surface, but in reality the methodology and work that’s behind it is deliberate and complex,” he explains. In hindsight, this metaphor could be attributed to the trio’s entire body of work. Whether they are designing an apartment building, a museum, or something decadent, they aim to create icebergs that are much more than meets the eye. Just like jewelry, there is no substituting a GRAFT knock-off for the real thing. You’ll feel the difference in the way it interacts with the space around it, how it ages and rubs against the Earth itself.

Before the end of the interview, we ask the three founders if they ever think back to who they were when they met – three earnest choir members, minds splashing with ambition – and marvel at how far they have come and the legacy they have left. They look at each other, smirk and nod coyly. As Lars concludes: “we were never trying to invent the wheel, we just wanted to see if the wheel could also fly.”

To learn more about GRAFT and the GRAFT Brandlab, visit their websites now.