When it comes to solving the housing needs of our planet’s expanding population, future technologies and infrastructure are often the go-to options. But construction entrepreneur Indrek Kuldkepp has found the key to solving his housing needs, and those of thousands of others around the world, by looking to the past.

Indrek, founder of the Estonia-based company Avrame, was seeking an affordable way to build himself a home in 2015 when in his research he came across the A-frame house design. It is so-called because it has steeply angled sides that begin at or near the foundation line and meet at the top in the shape of the letter A.

Although the triangle shape of the A-frame has been used throughout building history, it surged in popularity around the world in the post-World War II era.

In 1934, the Austrian-American architect Rudolph Michael Schindler built the first modern A-frame house in California, and it was this style that other architects went on to popularise from the 1950s to the 1970s.

As the middle classes prospered during this era, there was a demand for recreational second homes, whether on lakes or as ski chalets. The A-frame was perfect for this as it was easy and cheap to build and efficient in the use of materials. Its unique shape was considered fun and effective for a holiday home but too out there for a primary base. 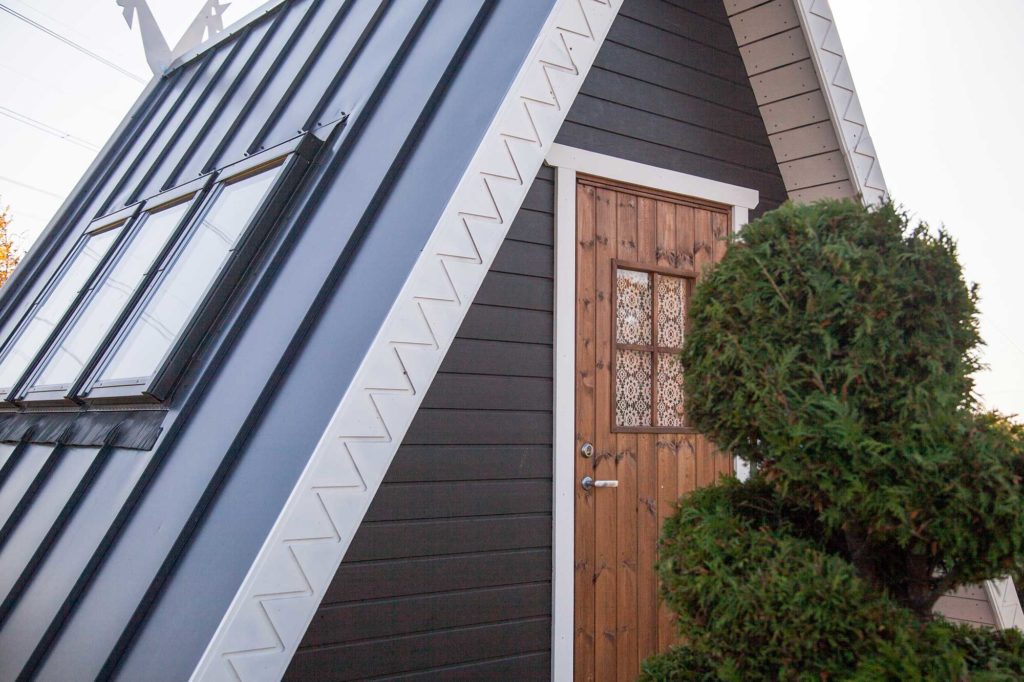 'Building a home is – for most of us, at least – a once in a lifetime project.'

However, through Indrek’s work over the past couple of years, the A-frame is coming back into fashion as a cost-effective, durable and efficient housing solution among homeowners from Europe to Africa, the US and Asia. His numerous successful sales and happy customers show that this style is not just a flash in the pan.

‘The A-frames were hugely popular in the ’70s,’ Indrek says, ‘but due to insulation issues, they were mainly used as summer homes. However, this [problem] has long been solved. It’s time to re-evaluate the A-frames.’

Born and raised in Estonia and having worked in the international wooden dwellings market for nearly two decades, Indrek knew what to look for when he began researching ways to build his own home. Even so, his standards proved to be too high for what he could afford and he struggled to find what he was looking for: a house that didn’t cost the Earth to build, that’s sturdy and has low maintenance costs, and that he could truly call ‘home’.

‘I think it’s a common problem for all buyers,’ he says. ‘When you’re not looking for a home, the market seems to be flooded with numerous suitable options, but as soon as you develop the actual need, the market dries up very fast.

‘You always want what’s best for you and your family, right? And as buying or building a home is – for most of us, at least – a once in a lifetime project, we like to take our time with it, making sure every little detail is in place. I had the same problem, you see. There were some specific needs I was looking to meet, but with all the options out there, I simply did not find the right combination.’ 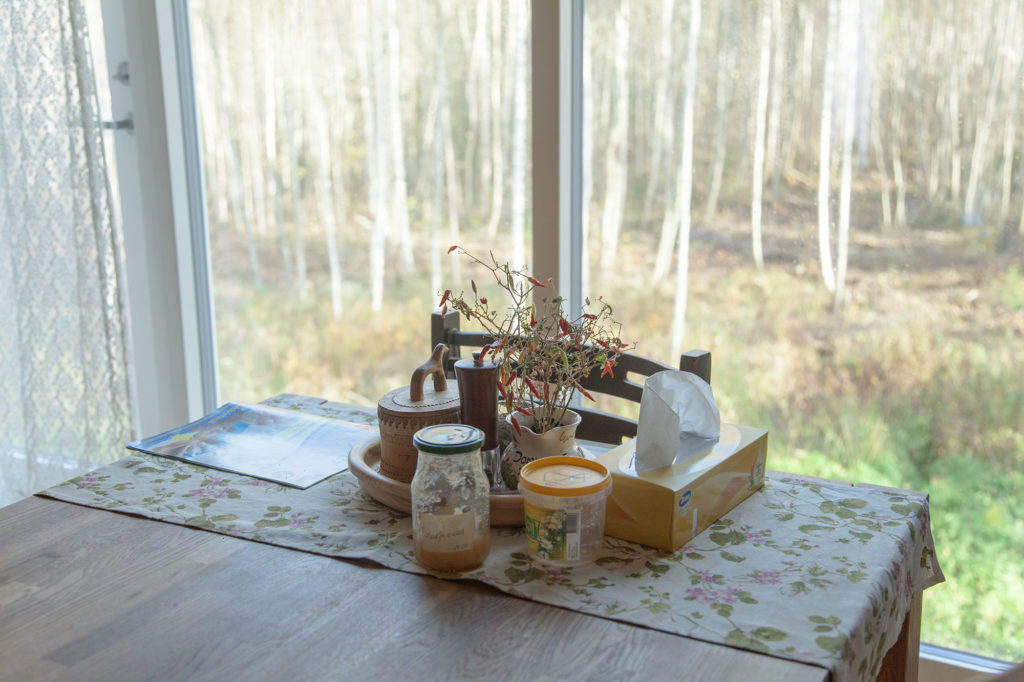 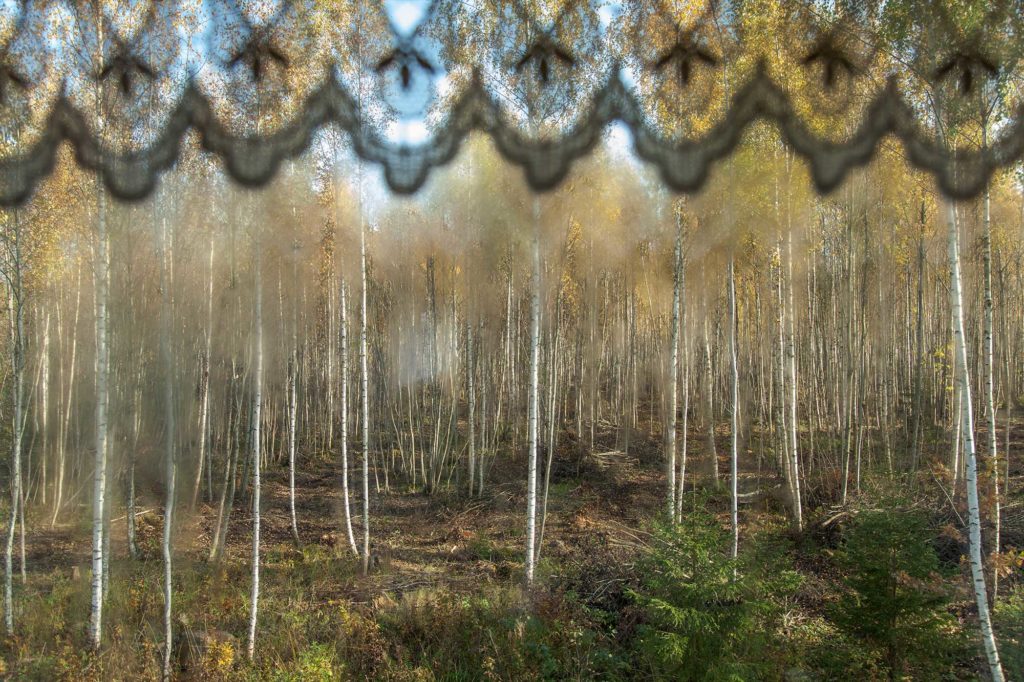 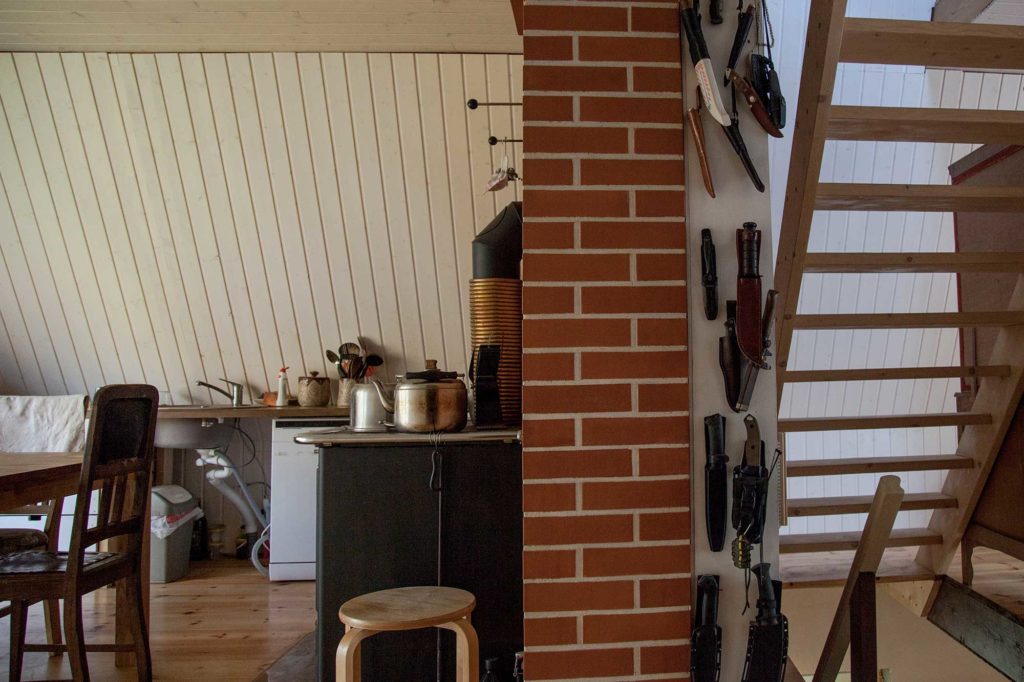 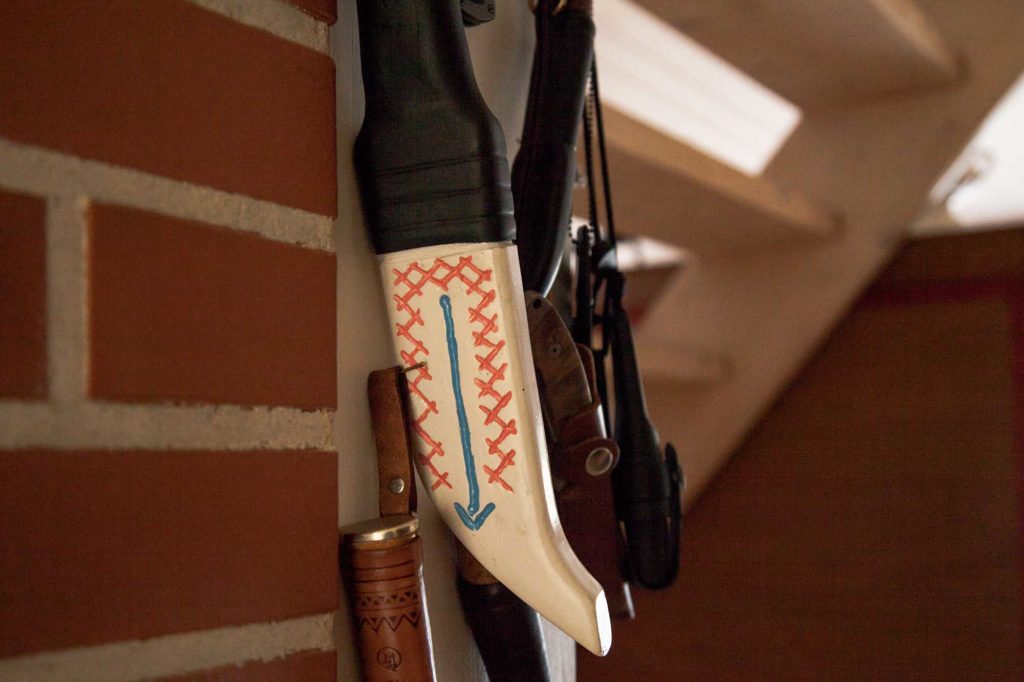 In Indrek’s opinion, as potential homeowners have become more knowledgeable and (rightfully) more demanding, increasing pressure has been placed on realtors. ‘Materials, sustainability, autonomy… these are just the first things that pop into my head. Depending on the region and the customers, the demands for a new home can be really high.’ He adds with a laugh: ‘What, you think I wasn’t a picky customer?’

With his years of experience in the market, Indrek arrived at a simple logic that he calls ‘the price seesaw’.

‘Just like a kids’ seesaw,’ he explains, ‘there is no way both of the seesawers can be up at the same time, nor is it possible for them to be down on the ground.

‘There is a similar logic with house prices as well: you can get a home at a very affordable price, but you’ll most likely end up spending a fortune on different improvements. And vice versa: a well thought out and professionally designed and engineered house can truly be your home, but that type of hands-free comfort usually comes with lots of zeros attached to it – it’s very costly.’

When Indrek discovered the A-frame he concluded that this was exactly what he had been looking for: an affordable home to build that could be run efficiently. ‘After giving it serious thought and discussing numerous details with my friends better acquainted with modern-day engineering, I came to the conclusion that an affordable home relies on efficient planning and execution; a reliable framework,’ he says. 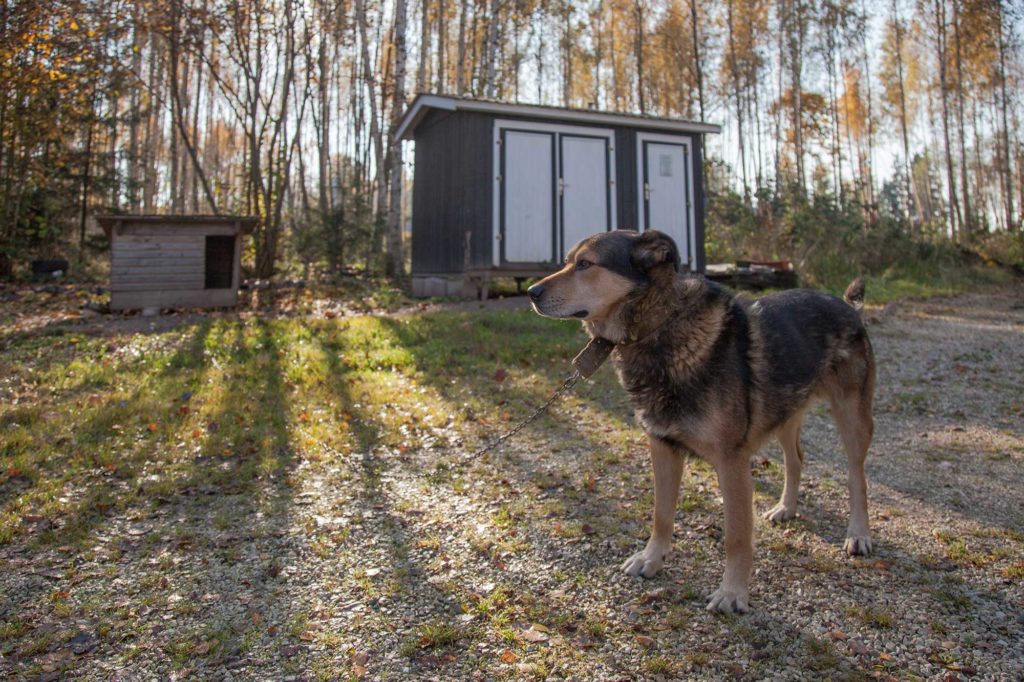 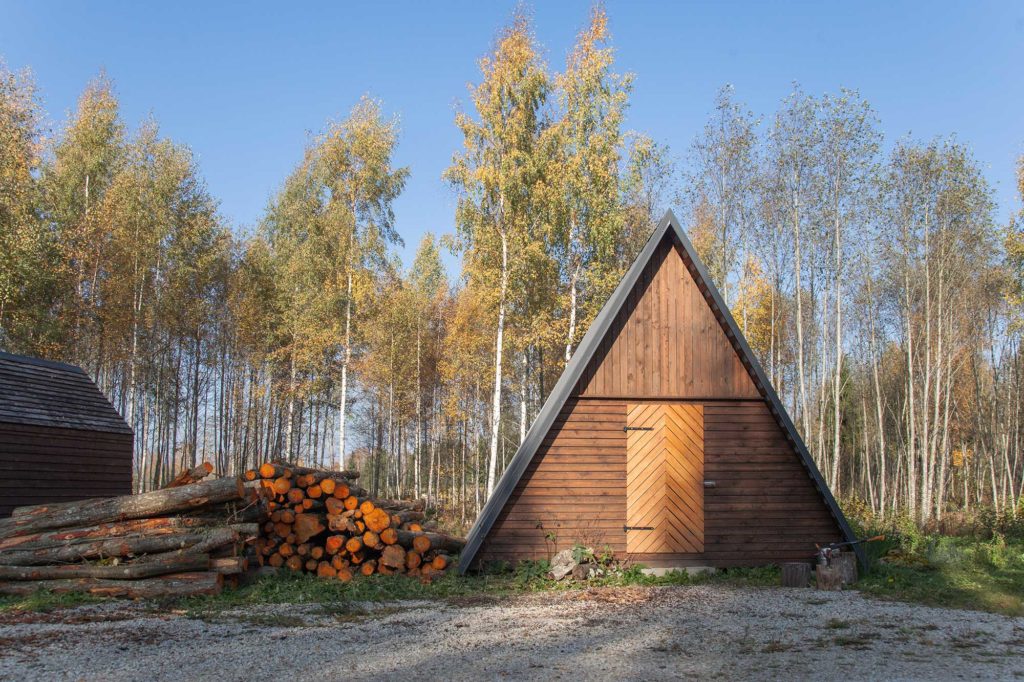 ‘The construction project itself seemed a bit like madness, so I thought, why not go all in?’

Indrek’s home – the first A-frame he designed and erected in the middle of a forest – looks simple but its appearance is deceptive; it’s actually extremely well-structured and thought out.

‘I had this patch of forest and when I say forest, I mean trees and nature older than I am. There wasn’t even a road leading up to the plot. In fact, there was no plot. I just had a vague idea of how I should go about doing it. Amusingly, though, I had no fear of failing, even though the thing I went for had never been attempted,’ Indrek says.

The ‘attempt’ was to build an A-frame home in Estonia. As elsewhere, A-frame houses were not new to Estonia but they had mainly acted as summer homes. ‘During winter time it can get pretty crispy in Estonia, especially in the southern parts where I live. -25°C (-13°F) is not unheard of, so you might imagine insulation and heating were my main concerns.’

With his new home planned in the middle of the wilderness on what had only recently become a plot, Indrek had no hope of getting himself connected to any infrastructure: gas, power, sewage, etc. ‘Truth be told, I’m really roughly 200 metres away from the nearest standpipe, but the thought of being “connected” didn’t really seem interesting.’

That’s when he started to seriously consider various off-grid options. ‘Off-grid’, or ‘off-the-grid’, is a lifestyle that promotes autonomy and not being connected to any government or municipal infrastructures, be it drinking water, sewage or electricity. ‘The construction project itself seemed a bit like madness, so I thought, why not go all in?’ Indrek recalls with a chuckle. 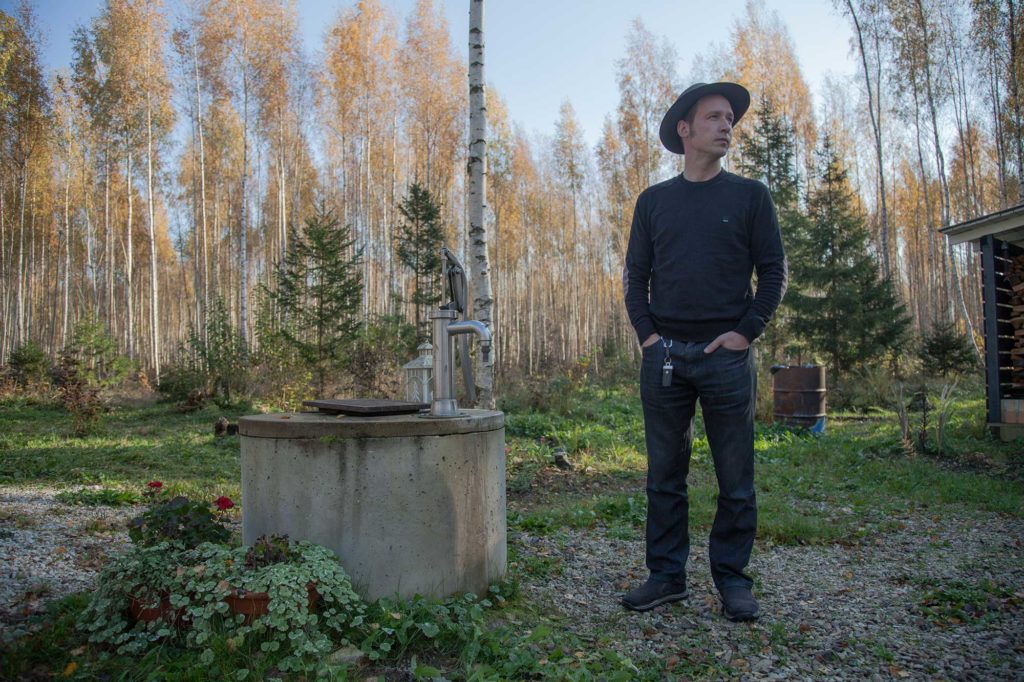 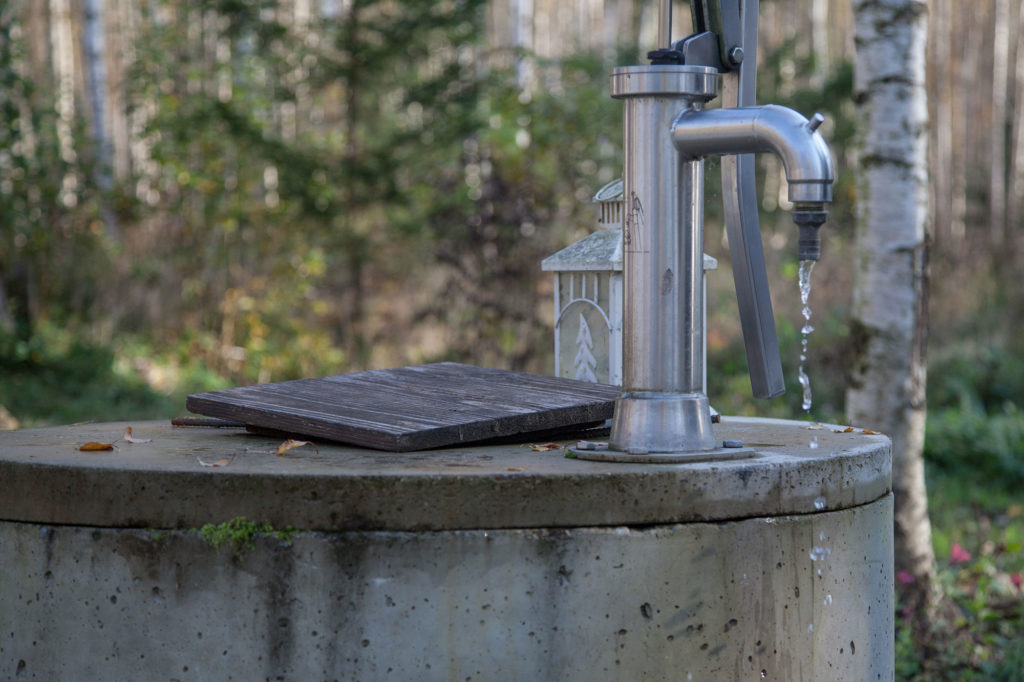 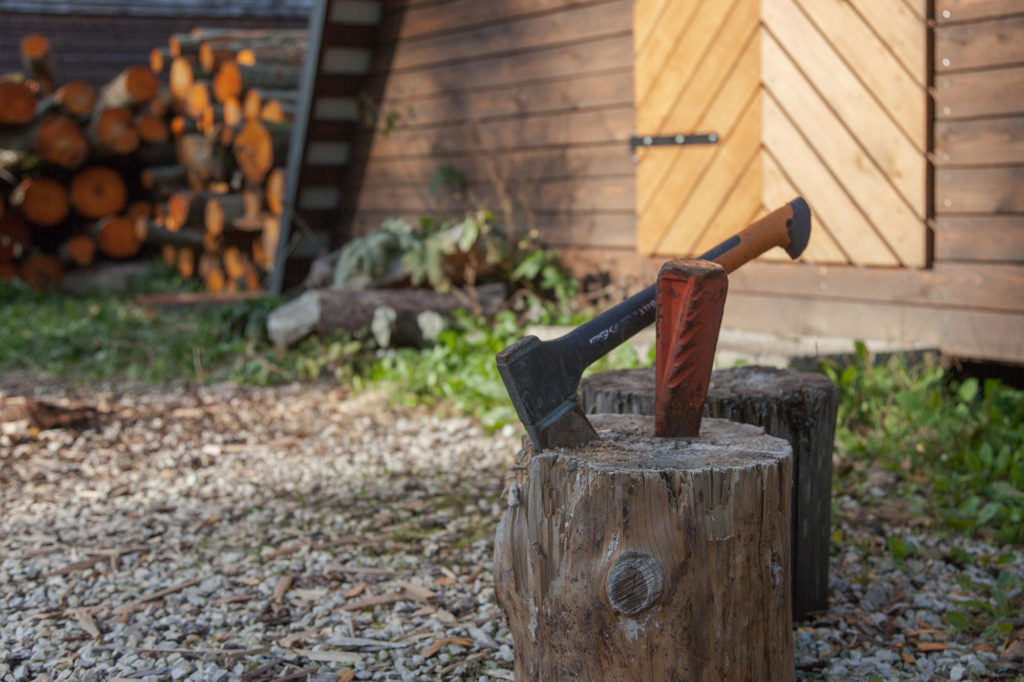 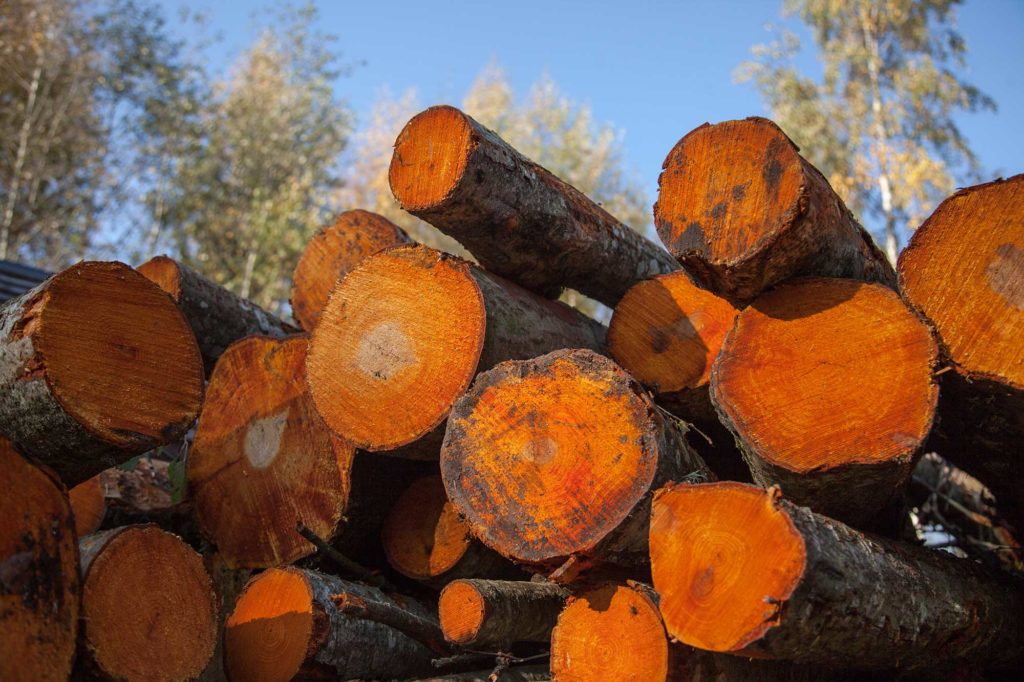 With all the components in place, the construction could begin, and within a year Indrek’s first A-frame was standing tall. ‘In order to really get the feel for what I was building, I was hands-on all the time. Be it the choice of materials or some construction principles, I was constantly in the loop. Besides, with construction, you see the result of your work right away.’

Indrek says the construction wasn’t that troublesome, aside from a host of pesky problems that cropped up. ‘I had help, of course, with friends with architecture degrees holding my hand along the way. Nevertheless, construction can be unpredictable on some occasions, no matter how good of a team you have. Can you imagine coming up with solutions constantly along the way?’

Indrek concedes that in retrospect he might have done a few things differently, but values the knowledge he has gained, which has helped him to build up his A-frame company. ‘The fact that I live in an A-frame myself helps a lot. It inspires trust, but not only in the eyes of the customer, but mainly in myself,’ Indrek says. ‘One of the things I was able to incorporate into the A-frames we sell is the DIY component, making it possible to erect the dwellings oneself.’

What Indrek appreciates most about the A-frame is how efficiently it can be built and maintained. ‘When I told you about the seesaw and the fact that you cannot build affordably and have a cost-efficient living at the same time… Well, to some extent I stand by it, but my home does come bloody close to achieving both these goals. If technology develops even further, perhaps I’m going to have to eat my words some day,’ he laughs. 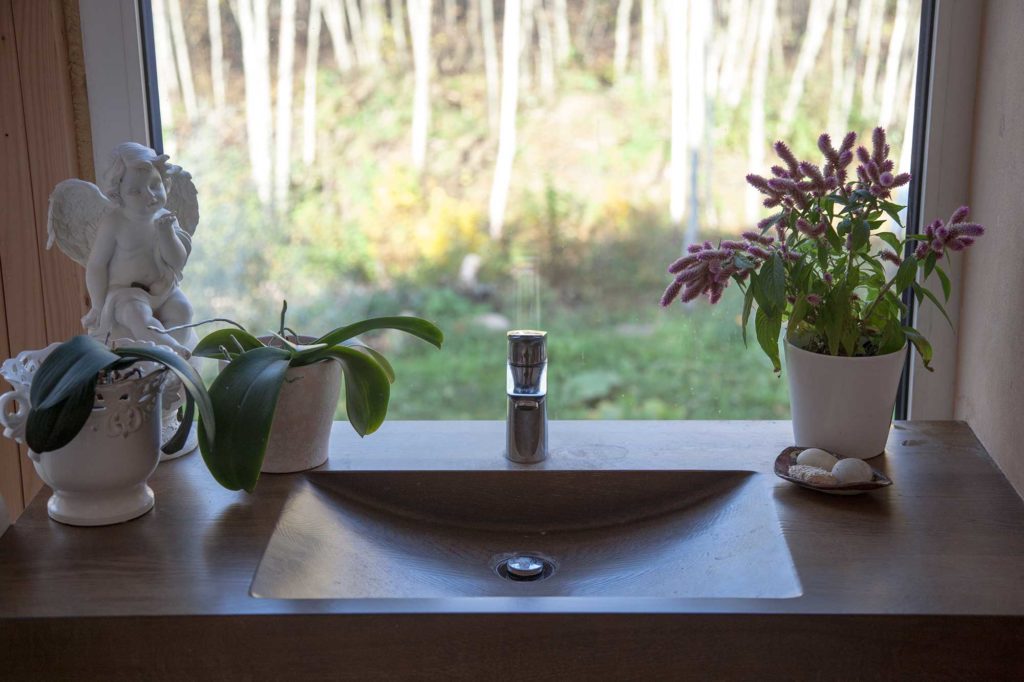 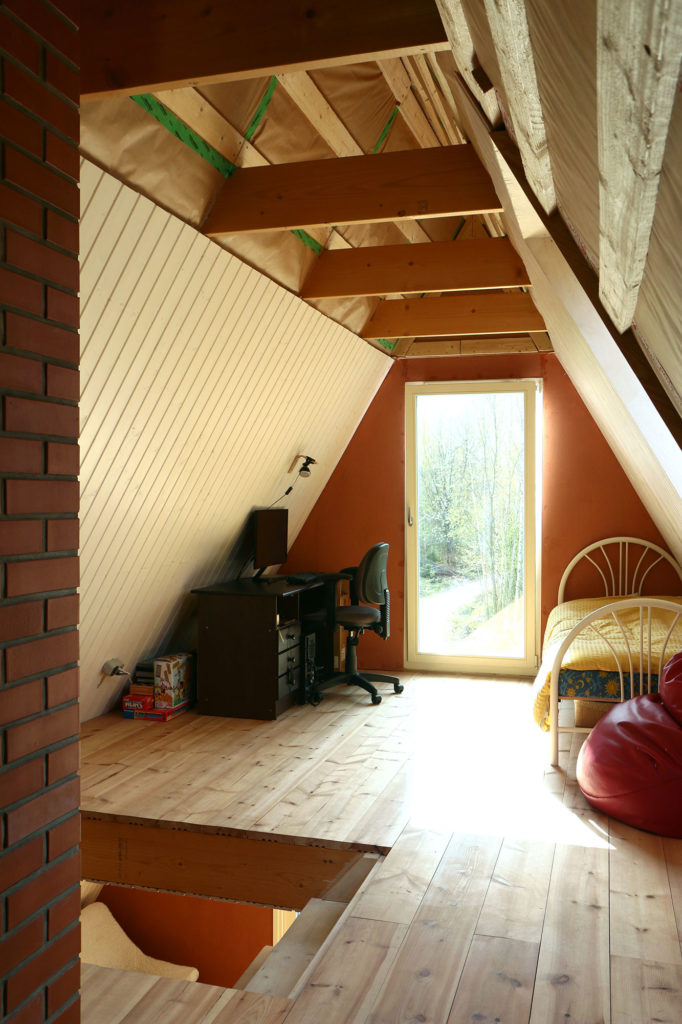 ‘I think one’s living space is a representation of one’s personal space.'

According to Indrek, the housing market is – in most cases – built on bells and whistles and with no options for autonomy when it comes to cost. ‘I had a lot of time to thoroughly think through all the aspects I wanted in my home, but most modern-day houses are built to earn someone profit. I’m not opposed to it, but it’s just the way things are. Time is, indeed, money to the developers of such projects and I can respect that, but it ultimately means the homes that are built to be owned, eventually start owning you.’

Indrek is referring to all the aspects that modern-day houses have, but which are highly susceptible to man-made external influence. ‘Honestly, I’m mainly referring to bills. I pay nothing for my electricity, for example. Nor drinking water. It might sound like something out of a survival book, but it is not. That’s the way of life of the future. I have full control over my costs.’

For Indrek, homes of the future will be one of two types: homes that are fully integrated with everything and everyone or homes that strive towards ultimate autonomy.

Indrek strongly believes that a home should be a place of refuge. ‘Nowadays, where a majority of life is digital and everything is in “the cloud”, a nomadic lifestyle is very popular. Though from an anthropological point of view, this is a huge change for us as a species. Most of us are accustomed and used to staying in one place or – at the very least – returning to that place at least once a day.’

As well as designing houses that are affordable to both construct and maintain, with the help of the Avrame team, Indrek has managed to reduce the floor size of his buildings, making them a huge hit in locations where land is scarce.

‘I think one’s living space is a representation of one’s personal space. Not to get too esoteric, but we want to feel cosy and safe at home, but that’s not possible to achieve if you constantly move around,’ Indrek says. ‘Working long days just to keep the lights and heating on should not be the future. That’s not the way of life.’