Freeskier Max Kroneck has lived in the Alps for his whole life and even in that short timeframe, he has been able to feel the effects of climate change.

When we first speak with Max Kroneck, you can hear his passion and enthusiasm dripping down the phone line. Our idea of doing series of stories on the effects of climate change in the Alps is resonating with him, and now his words are bubbling over. He starts to talk about the changes he has been feeling in recent years, and the concern that it has been producing. Already you get a sense of how much the mountains mean to him, and it’s clear we are talking to the right person.

We meet a few days later in his hometown of Kochel am See in deep southern Germany, close to the Austrian border. It’s a picturesque town, unspoiled and far removed from the urban sprawl. Max is warm and friendly, keen to show us around and to talk. He was born and raised in the area, taking to the slopes not long after he could walk. Now he’s primarily a professional freeskier – which encompasses a lot more than just skiing down a mountain face. He’s involved in filming, photography, competing and more. As a freeskier, the focus is on skinning (climbing) a mountain using your own power, and taking a backcountry, off-piste, route down.

Unlike most resort-based skiing, a freeskier will often just have one run per day. Rather than taking a chairlift up and down the slope, a freeskier will skin their way up the mountain at the crack of dawn and then spend the next hours making their way back down again. Exploration is as much of a part of the mission as the act of skiing. It’s a job that has taken Max traveling throughout the world – Japan, Canada and more – but the Alps are where he calls home. And he doesn’t just ski there; he’s in the mountains every day – climbing, riding, walking. 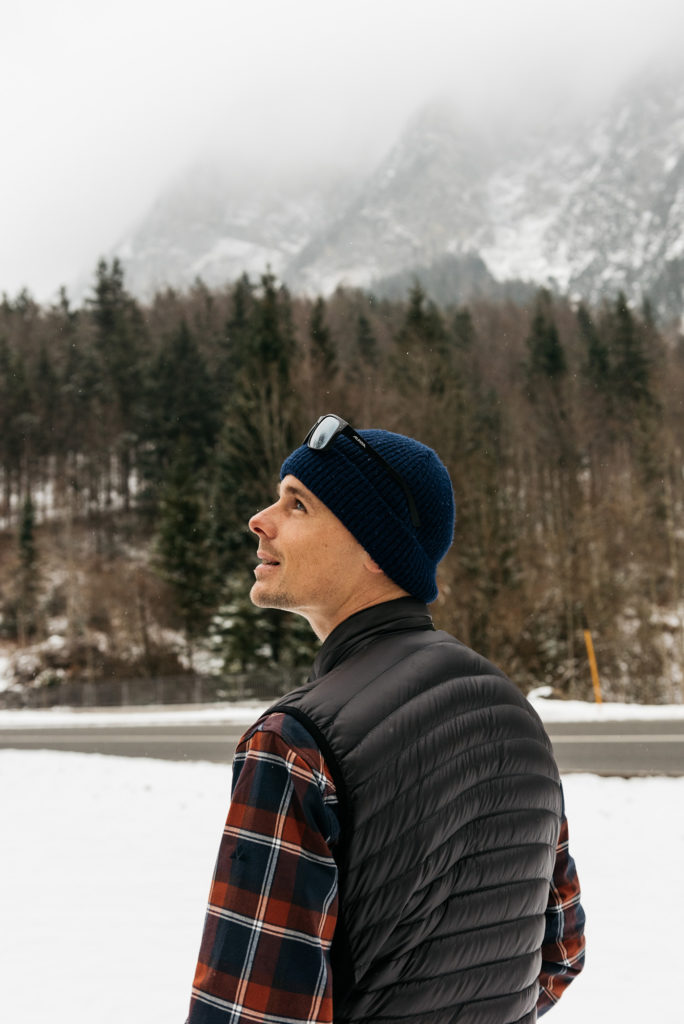 We’re here so that Max can show us round the town and show us first hand the changes that he has seen in in the Alps in recent years, how different things are. When most people think of those who are suffering from the direct effects of climate change, coastal areas with rising sea levels are often what first spring to mind, but mountain regions are being heavily affected too. The rising global temperature is leading to the recession of glaciers, plus various impacts on low lying mountain regions and a lot of knock-on effects for the people who live and work in the Alps.

“The future of ice climbing is a little bit rocky!”

The first location Max takes us to is a waterfall where he learned to ice climb as a kid. Ice climbing is exactly what it sounds like – scaling up walls of ice using special attachments for your boots and other climbing equipment. When he was younger his dad used to bring him to this spot all the time, and it’s where he first developed his skills and abilities. We’ve climbed a short way to get here, standing at the foot of the waterfall you can hear the water cascading down the rock face. It wasn’t always this way. Max explains that despite this being the best winter conditions in around ten years “there still isn’t enough ice to be able to climb.” He demonstrates the problem by putting one of the ice screws into the frozen waterfall. The water just pours through the screw and it’s completely unsafe. 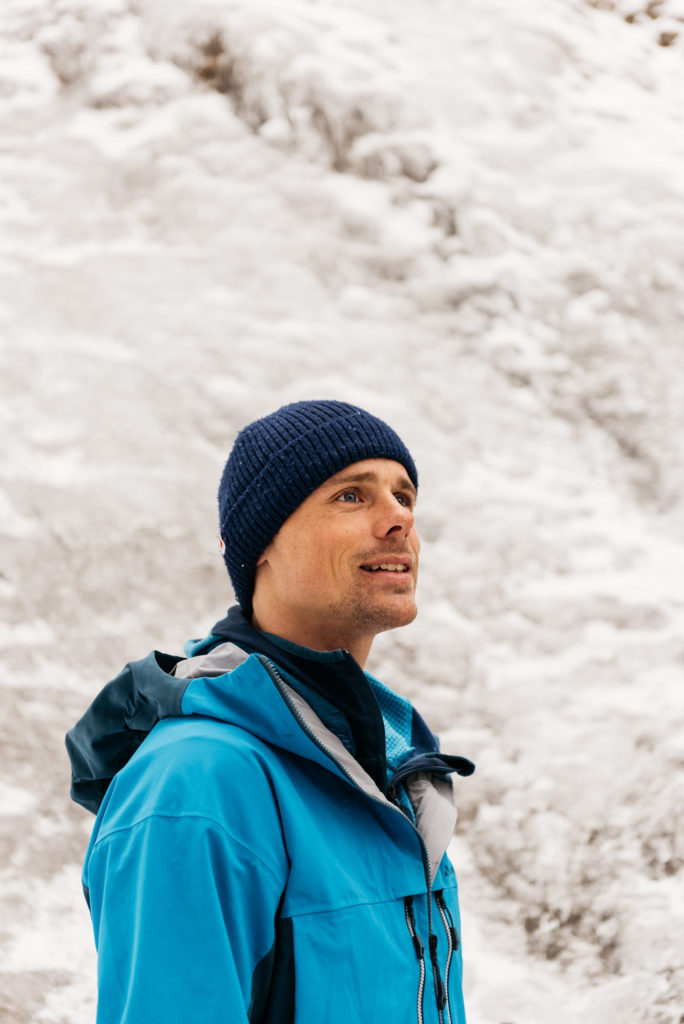 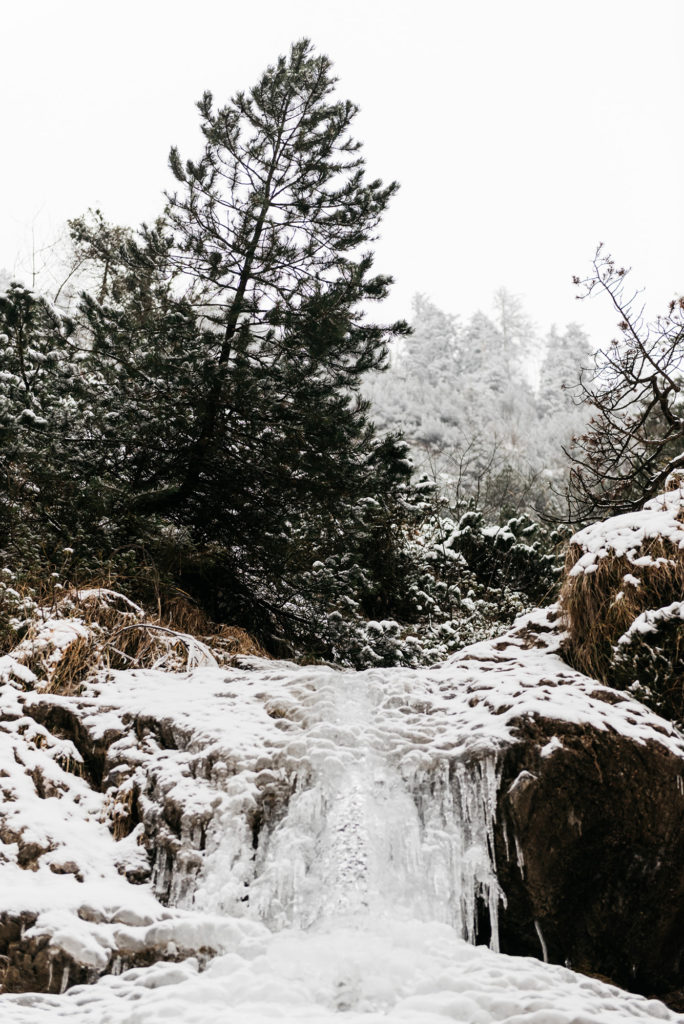 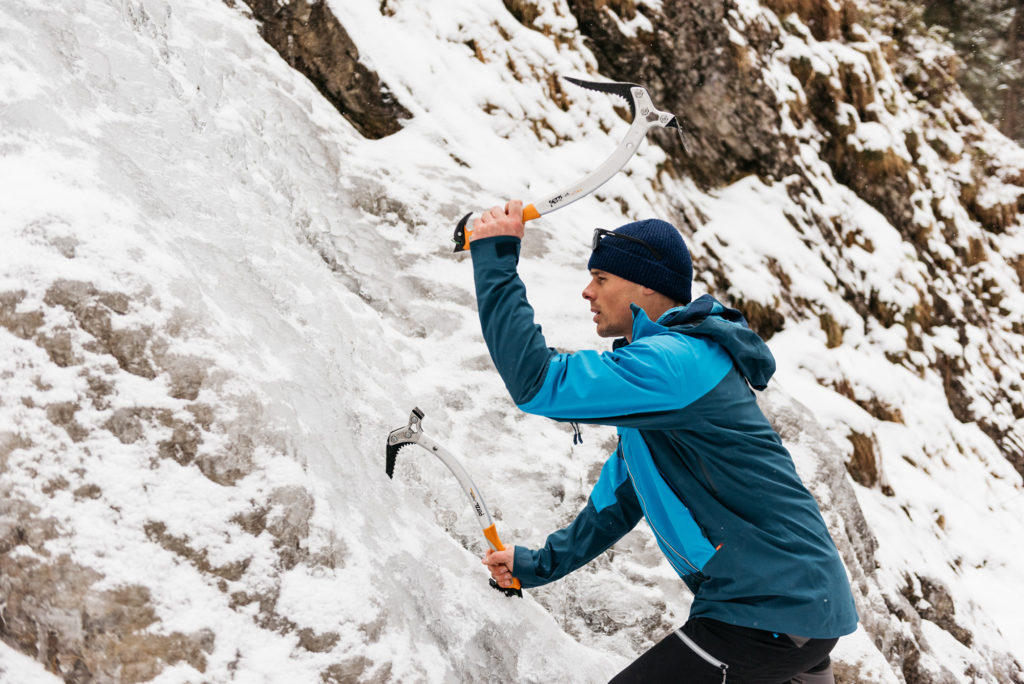 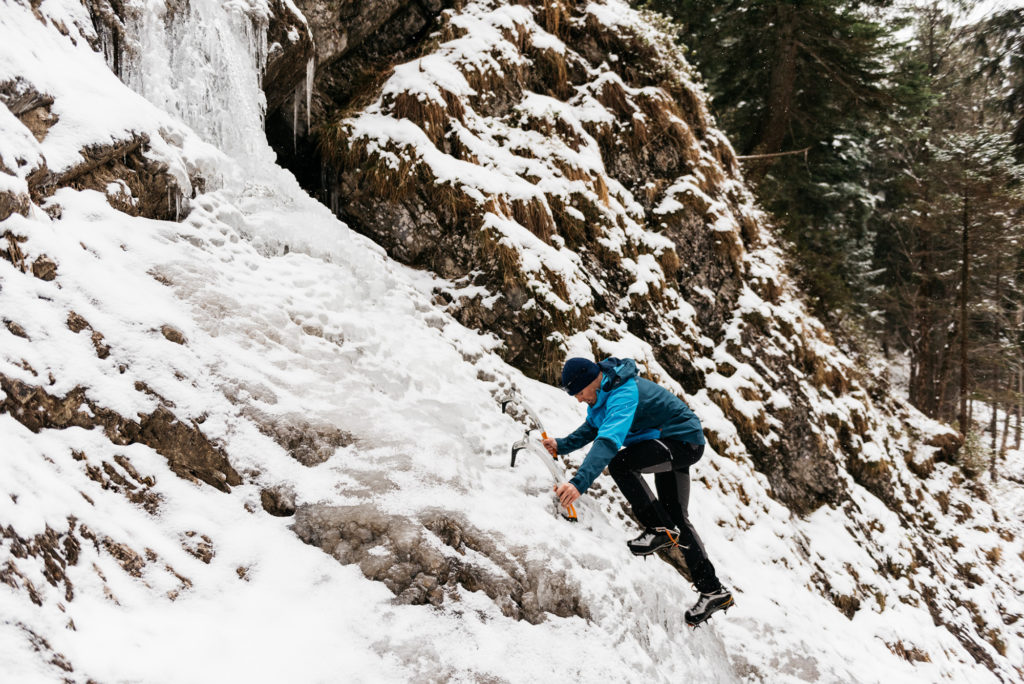 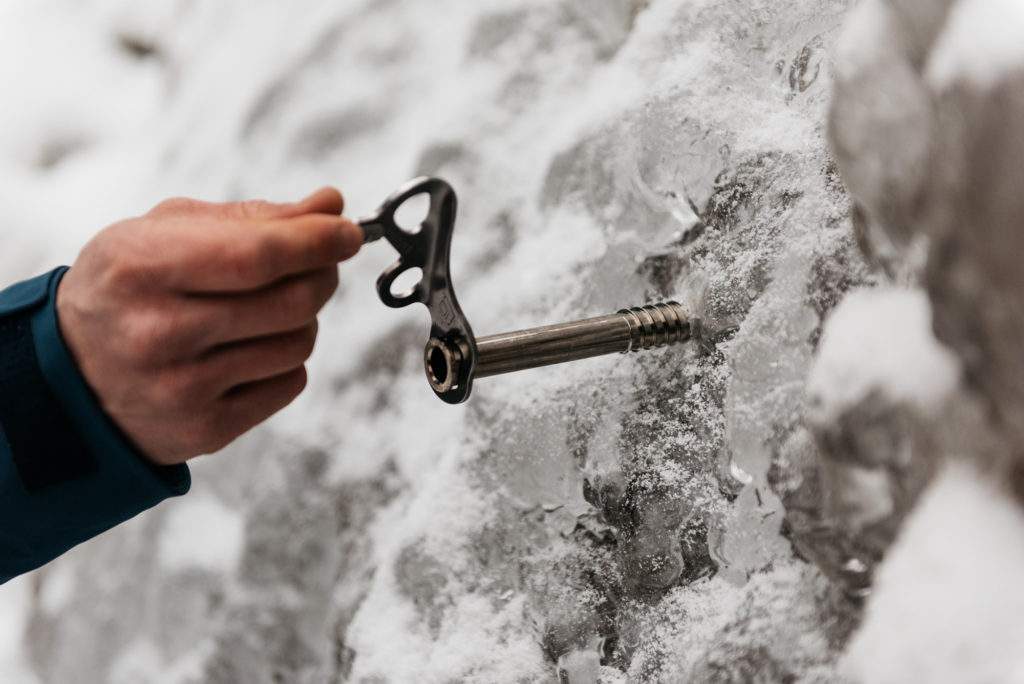 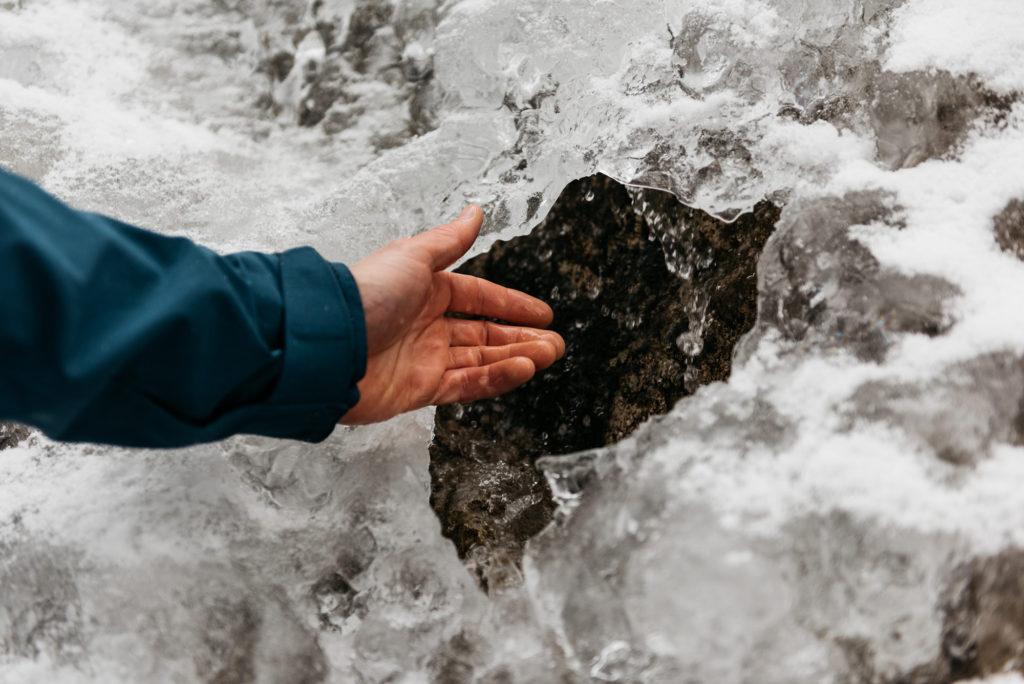 What does this mean for the future of ice climbing? “The future of ice climbing is a little bit rocky!” Jokes Max. “Without much ice you’re only able to do it at really high altitudes, and less people will do it.” You can tell from speaking with Max that he really cares about the mountain and that he has a special relationship to it. When we press him about what he loves about ice climbing, the insight he gives us helps us understand this relationship more. “The great thing about ice climbing is that even if like at this spot you are only a few meters away from the street, you feel separate from everything. You feel super alone and in nature. It’s always great to just walk up alone sometimes and enjoy being here, but I don’t think it’s that possible anymore.”

"I think in every valley there are at least two resorts like this one that have had to close.”

We move on from the waterfall and drive a short distance to our next location. Max has taken us to the ski resort where he first started to hone his skiing skills. There are patches of snow scattered around the slope, but it’s mainly grass peeking through. “This is the best winter in around ten years and it’s still not enough snow,” he laments. It’s a slope in one of the lower regions of this area of the Alps, and the rising temperature resulting from climate change is hitting this type of resort hard. There just isn’t enough snowfall to ski on in the winter months. And the reduction is snowfall isn’t the only issue for these smaller places, competition from other resorts is hitting them too, and it’s not an isolated problem  “The small resorts like this have to close. The bigger ski resorts, that they build up with snow cannons and produce their own snow, they’re growing up and getting bigger and bigger, so the small ones have to close. I think in every valley there are at least two resorts like this one that have had to close,” explains Max. 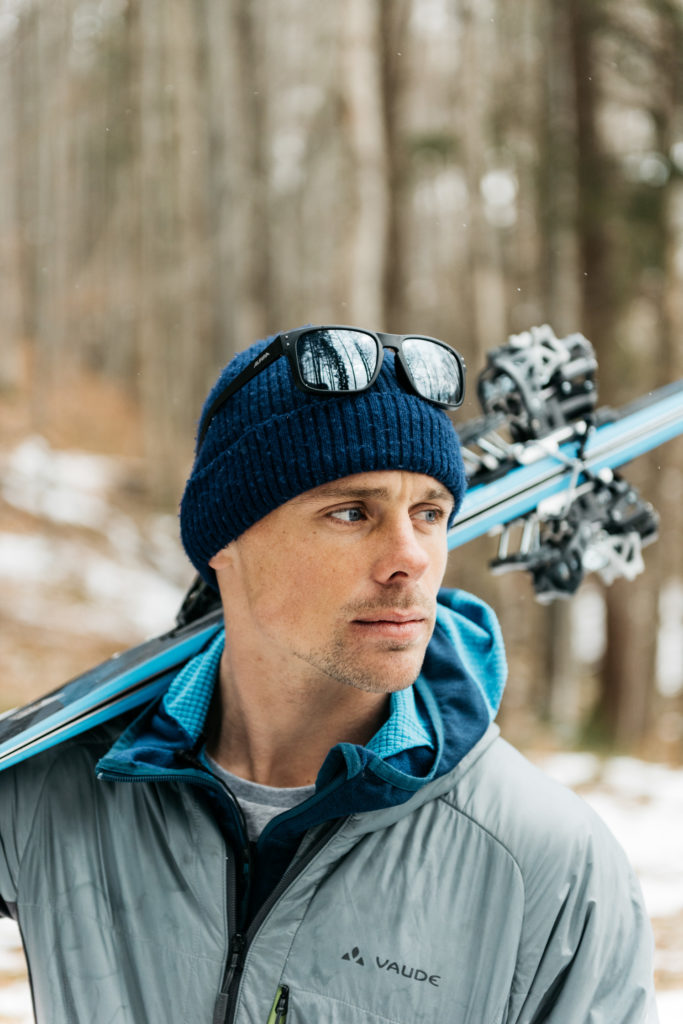 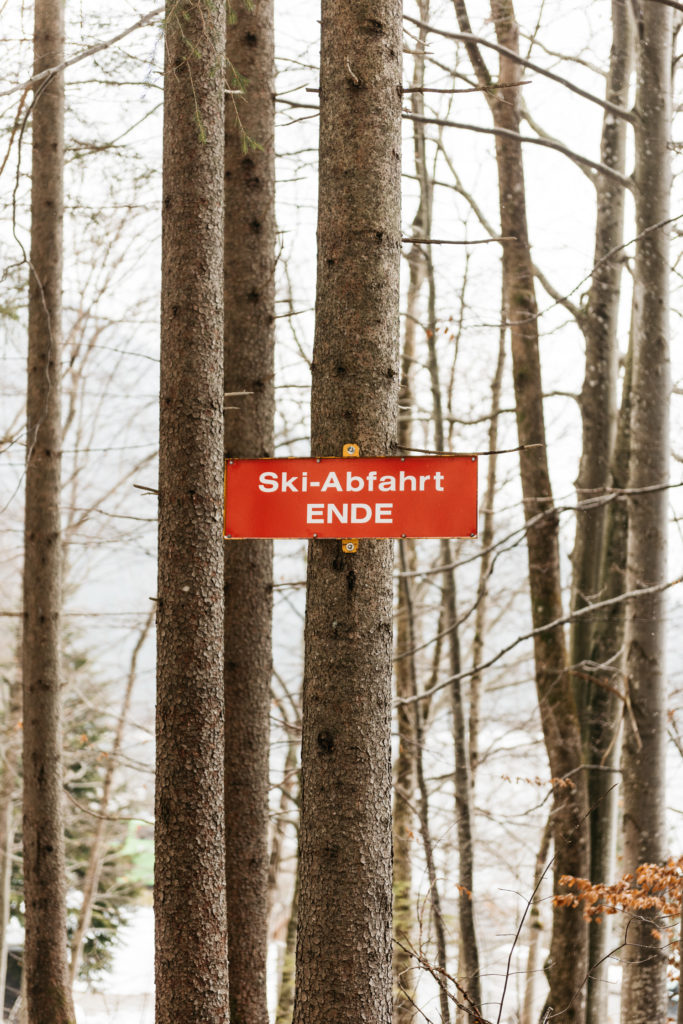 It’s sad to think of how much these areas have decimated as a result of climate change. To go from buzzing local resort filled with skiers and people enjoying themselves barren area with no one around is a disheartening journey. It’s especially sad for Max. This was his local ski spot when he was a kid and now it’s just gone.

The bigger resorts Max is talking about are ones that use snow cannons to produce artificial snow for the slopes by forcing water and pressurized air through the snow cannons. While snow cannons have been around since the 1950s, their popularity has risen in recent times. This is in part due to the steady decrease in the length of the snow season of around five days per decade. The artificial snow means that these resorts can guarantee snow all season, even when there isn’t enough natural snowfall. To be able to guarantee good snow is a real advantage for these places, and it makes sense. If you’re a family that has booked a week-long holiday, you want to know there will be snow when you’re there.

" I think the only way to change it is for people to get more spontaneous again."

We move along to the final destination of our tour with Max. It’s at the foot of a chairlift that is currently out of service for repairs. Skiers have long stopped using it as a ski lift, but it still gets a lot of people taking the ride to the top to enjoy the view, both in the winter and during the summer months. In the brief time that we spend there speaking, dozens of people turn up hoping to scale the mountain, only to be disappointed when they find out it’s closed. It’s a fitting backdrop to finish our conversation to – some parts of the Alps are no longer in service due to climate change, and this is a crying shame. 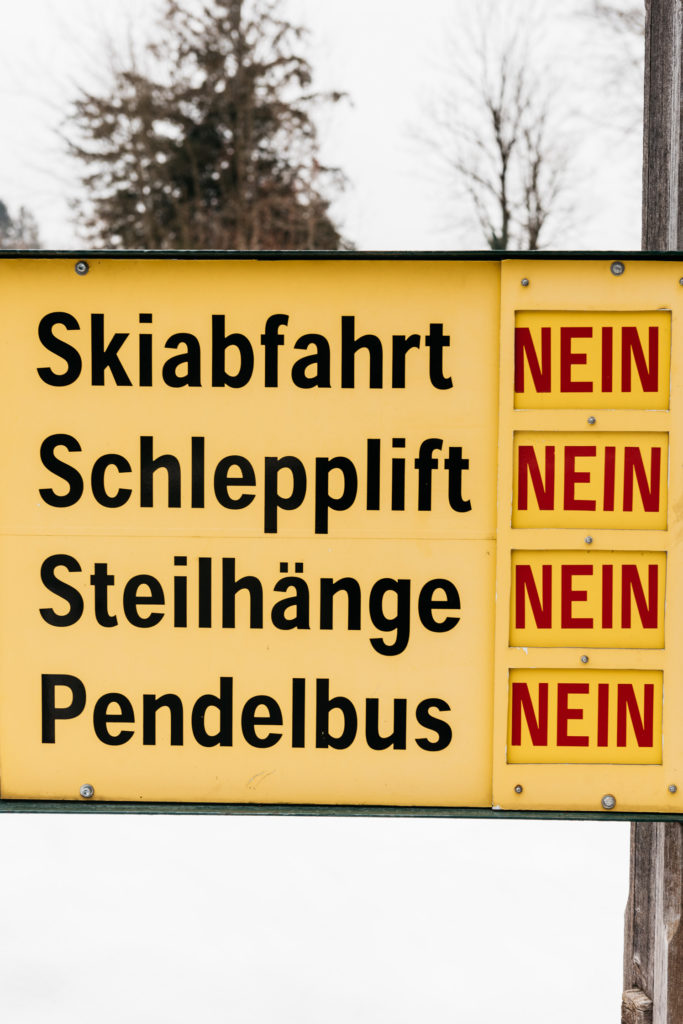 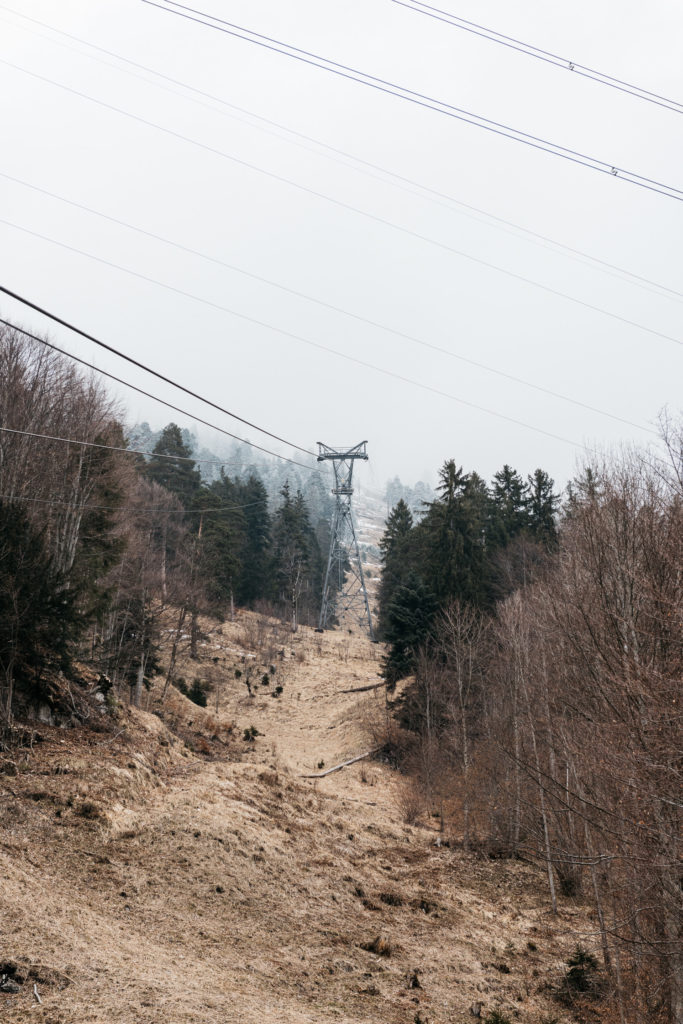 Our talk returns to the change in how people use the mountains during the ski season, and how people’s expectations have changed. Max has a theory about where this has came from, and what can be done. “Maybe that’s the change of society,” he says. “They are really planned through, so they only have the one week a year and then they want to go skiing and they don’t want to be anywhere else so they have to do this timetable and they can’t change it. Maybe this is the point. I think the only way to change it is for people to get more spontaneous again, to have more time for themselves and not just being busy running from one business to the other, being on their mobile phone and ‘Bam bam bam bam!’ They need more time for themselves, so they can have a look and see what is good to do, and say ‘Ah, OK, maybe today we do this or this’ but not just ‘Bam, it’s planned and we have to go skiing today’.”

Max is right. Everything is moving faster these days, and society doesn’t seem to be slowing down. In the relatively short time that Max Kroneck has been alive and living in the Alps, he has seen and felt the effects of climate change – that’s a startling reminder of how severe it is. When we ask how he feels about the future, he responds with: “Fearful. A little bit fearful.” But there is hope. More and more ski companies are aware of the effect that climate change is having on the Alps, and they are switching to sustainable methods of producing skis and ski products. This is a movement that Max is firmly behind. He explains that he has been undergoing a bit of a change within himself recently, and he is more and more conscious and aware of the importance of being sustainable. If more people keep getting on board with this change, then hopefully the Alps will be protected for future generations.

The Alps Are Changing #4: ‘We’re seeing a temperature rise in The Alps’

Glacier scientist Lea Hartl works in Innsbruck, studying glaciers and permafrost in the region and...

The Alps Are Changing #2: ‘You’re definitely leaving a footprint somewhere’

Sebastian Steinbach is the owner of Black Sheep, an independent freeride ski shop based in...